St. Vincent and Matty Bovan Collaborate on a Surreal Party Dress for a New Art Installation

Posted by thegudeer.com on November 26, 2019
What does one wear to a futurism-themed pop-up champagne bar where the dance floor is lit up by melted disco balls and edible pastes and gels are served to accompany the bubbly drink? If you’re St. Vincent, aka Annie Clark, and you’re the mastermind of said pop-up art installation-cum-champagne bar, wearing something pulled from the whimsical world of British designer Matty Bovan is certainly one good answer.
This past weekend, St. Vincent served as the host of a Veuve Clicquot pop-up champagne bar, titled Souvenir, which took place at Covent Garden in London’s West End. To bring her surreal vision to life, Clark worked with plant-based experimental food project Plates London, the Rotterdam-based design collective Rotganzen (who made the wonky disco balls), and mixologist Pippa Guy. The installation ended up taking the form of a minor social experiment. Clark played different characters throughout the event, including a coat check girl, a bartender, and a waitress. “I’ll be taking people’s coats and then throwing them on the floor, or sniffing them, or putting them on, maybe feeling them,” Clark says over the phone in the hours leading up to the first night of the event as she’s getting her makeup done. 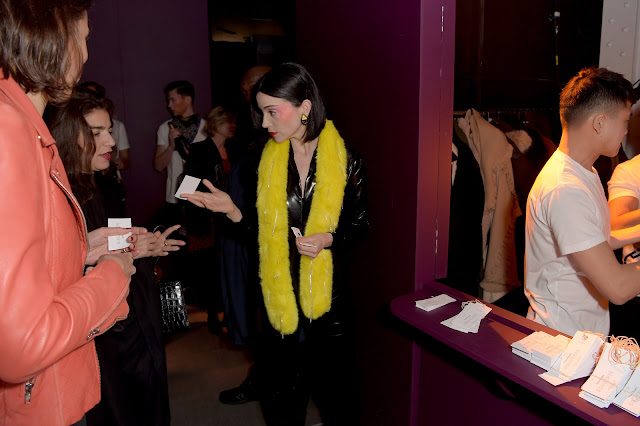 Clark says she was inspired by a very specific conception of the future, one that’s very different from 1960s, Jetsons-era nostalgia that’s come to represent a certain kitschy-futurist design aesthetic. “In the future, what are people going to be looking for when they’re coming to convene? What is it that people want when they talk to one another?” Clark asks. “They’re looking for connection, and they’re looking to lose themselves a little bit. When people are tasting things, and all their senses are alive, they’re kind of looking for memories, and that was the initial inspiration for the whole piece—to evoke connection in this sort of surreal way.”
Clark’s collaboration with Bovan was a central part of building this off-kilter, futuristic world. Bovan designed silk scarves emblazoned with the word “Souvenir” worn by everyone on the waitstaff, and he helped come up with distinct, kaleidoscopic makeup looks for each person. He also created the otherworldly garment that Clark changed into for her performance after she paid her dues as a temporary coat check girl or waitress. The colorful, structural piece makes Clark look like an alien wrapped up in a comforter. “We worked with Liberty Fabric again on scaling up a print, and the base is foam rubber wrapped in tulle and hand-sewn,” Bovan says.
The result is “incredibly strong-looking, yet feminine,” Bovan says. Clark describes it in more colorful terminology. “It’s like if Helen of Troy was a matador on acid.” 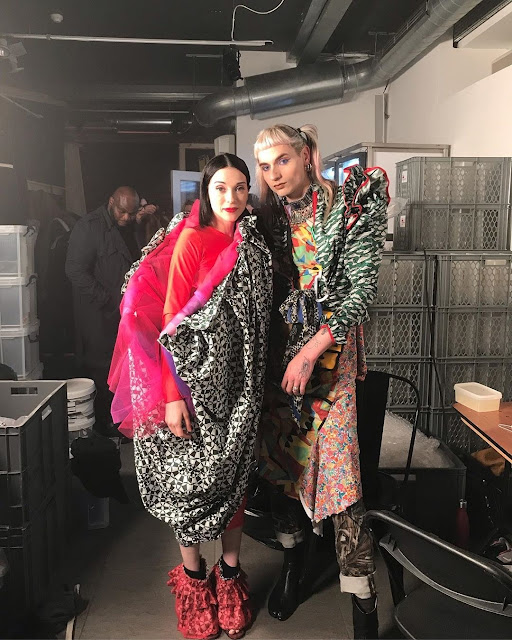 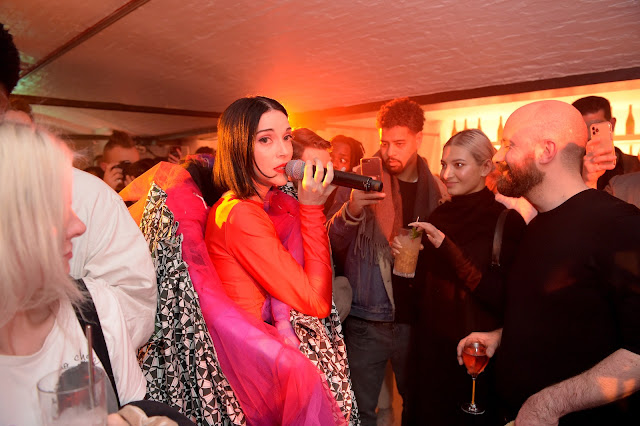